It had become a kind of tradition for Alexander Engineering of Haddenham (Buckinghamshire) to present their latest developments in the form of a special testday, giving the press ample opportunity to judge the qualities of the various cars that were put at their disposal. The company, headed by Michael Christie, had built up quite a reputation in making engine and suspension conversions for practically every available car in the late fifties and early sixties. In particular, their achievements in upgrading the BMC-A engine, found in so many cars in that period, established their name among the long list of tuning companies like Derringtons, Raymond Mays, Aquaplane, Arden, Speedwell and Downton, to name but a few.

It was a surprise for the motoring press when Michael Christie announced in November 1959, during their yearly autumn presentation, organised this time in the Weston Manor Hotel in Bicester, that Alexander had made an agreement with Turner of Wolverhampton and would distribute the new Turner 950 Sports (later to be known as the Mark 1). Delivery of the new car would commence after Christmas and many products from the vast Alexander range, including engine, suspension, brakes and interior, would be available for the Turner-Alexander right from the start.

It is interesting to note that Alexander went their own way with respect to component sourcing. Apart from the obvious choice of their light alloy cross-flow cylinder head, the long list of “Approved optional equipment” offered no less than 20 different items, amongst which a Lockheed servo in combination with the Girling disc-brake system, specially developed for the Healey factory (Sebring) Sprites and the Turner 950 Sports.

The cross-flow cylinder head (CR 9.4 to 1) delivered in combination with twin SU H2 carburettors about 60 bhp at 6000 rpm, compared to the 43 bhp at 5000 rpm (CR 8.3 to 1 and twin SU H1) of the Turner in standard form. The Autocar, reporting about the new Turner-Alexander on 4th December 1959, mentioned that a maximum output of 80 bhp was claimed if combined with high compression pistons and a road-racing camshaft. They also mentioned that a new company (Alexander Autos & Marine Limited) would market the car, using conversion parts supplied by Alexander Engineering.

In the January 1960 issue, Motor Sport complimented the car they tested during the November presentation in Bicester. Especially the body finish and weather protection impressed them. Funnily enough the engine of the Alexander-Turner (note the different order of the two brands as compared to the Autocar story) was less impressive, being described as “a rather tired hack engine which did not help to show the car up in a good light”. However, they promised to perform one of their “normal rigorous tests” on the car in the following months, a promise they did not keep.

Two road tests, however, were published as a result of the active marketing policy of Alexander. The first one was in Sports Car and Lotus Owner in March 1960, followed by another in The Motor of August 10 of the same year: quite some coverage for such a small company.

David Phipps (Sports Car and Lotus Owner) is full of compliments, referring to the Alexander-Turner (333 KPP) as “a 948 cc car with the performance of the 1½-litre MGA”. Performance and roadholding are described as “very good”. The Alexander-Turner, of course, had much in common with the Turner 950 Sports, but Alexander offered the double trailing arms to locate the rear axle as a standard, a construction that Turner recommended for the more powerful tuned versions and the Turner-Climax Sports with the Coventry Climax FWA engine. The standard 15 inch wheels were combined with a somewhat lower geared final drive (4.875 compared to 4.55 for the standard Turner). Acceleration figures were impressive for a 950 cc car: 0 – 60 mph in 13.6 seconds; and the recorded top speed was over 90 mph! David Phipps reported that Alexander had started experimenting with 13 inch wheels to further improve road handling.

Another interesting observation is that Alexander were apparently still experimenting with the inlet manifold, showing a large balance pipe between the four inlet tubes (yes four, no Siamese port on the cross-flow Alexander head!) in March 1960, that had been reduced to a thin balance pipe by mid-1960 in its final form..

The Alexander-Turner tested by The Motor (500 NKX) had received the thirteen inch wheels as already indicated in March. Other changes included twin SU H4 and the final drive back to 4.55. The acceleration from 0 to 60 mph remained unchanged at 13.6 sec, while maximum speed went up to over 95 mph! The Motor Road Test No. 28/60 is very accurate in this respect, even down to the 5% misreading of the speedometer. The Motor came to the conclusion that this car was perhaps too highly tuned for the majority of sports car buyers, but what remained was a feeling of “enjoyment of a comfortable, lively and exceptionally controllable little car”.

Although Turner’s are often referred to as “kit cars”, in fact only a part of the total factory output was supplied as a kit, especially for the home-market. A considerable part of the production went overseas and these were all completely assembled in Wolverhampton. Alexander delivered their “kit” on request, adding all the Alexander “goodies” the customer had asked for, but also undertook the conversion and tuning of factory-built Turners. 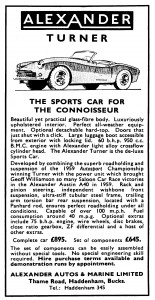 In the Sporting Motorist of January 1961, proud owner Ashley Clarke describes in detail how he built an Alexander-Turner, supplied as a kit, in just a hundred hours. It offers an excellent insight into what building a Turner meant: trying to save Purchase Tax (which had been lowered in April 1959 from 60 to 50% of the basic price, still equalling between £250 and £350 in the case of the Turner 950 or Turner Climax) meant investing a lot of spare time.

Alexander remained official Turner distributor till the mid-sixties. Turner had a habit of changing agents rather frequently (or was it the other way round?). In the period from 1955 to the end of the decade, Bob Gerard, combining racing and selling Turner Sports Cars, was their East Midlands Distributor, while Field’s Garage in Chichester had taken responsibility for South East England. In the early sixties, apart from Alexander Autos and Marine Ltd. covering the South, Gordon Unsworth of Motorway Sales in Derby became Turner’s new agent, taking over from Bob Gerard.

Up to 1964, things looked rather bright for Turner, still with amazing racing success, Turner’s keeping lap records at every UK circuit and with exports across the Atlantic and to South Africa continuing to be their main source of income. But Jack Turner went into voluntary liquidation in early 1966 following Jack’s illness and a number of other mishaps.

Alexander Engineering Co. Ltd. still exists almost forty years later at the time of writing. Now headed by son Timothy Christie, they are an active as well as important supplier to the automotive industry, in particular in the area of accessories and lighting equipment. They still occupy their historic premises at Thame Road in Haddenham.