Many Turners had a so-called Sports Coil installed as had many other British sports cars of the 50’s and 60’s as an aftermarket accessory, in an attempt to (further) improve the car’s performance. As far as I know, none of these cars ever had a Lucas Sports Coil as a factory standard item. Further investigating the subject of “Lucas sports coils” learned that there are in fact 4 different generations of these sports coils, whereby the so-called “Red Top” version is apparently the most attractive version.

Why a “Sports Coil”?

An ignition coil is in fact a transformer with about a 100 to 1 ratio between secondary windings (consisting of 6,000 to 20,000 turns) and primary windings (normally about 300 turns). The output voltage will therefore be e.g. 100 times greater than the input voltage.

When the contact points are closed the primary winding of the coil is connected to the battery and draws an electrical current of about 4 amps. The coil core is in fact an electromagnet with a magnetic field induced by the current flowing in the primary winding. When the points open to break the contact, the primary current must stop flowing and the magnetic field in the transformer will collapse. The collapsing magnetic field forces the current to continue flowing in the same direction and that current will charge the capacitor in the distributor. This raises the capacitor voltage momentarily to about 300 Volts, at which time this high voltage stops the current. The current then reverses direction, being driven backward by the high voltage at the capacitor. The initial 300 V spike in the primary winding will induce an output in the secondary winding of e.g. 30 kV (depending on the aforementioned winding ratio).

What type of ignition coil is required for a particular engine depends on the specific requirements of that engine: aspects like C.R. (compression ratio), the chosen sparkplug gaps, etc. have an impact on the required ignition voltage for the plugs to produce an optimum spark. In addition we should keep in mind that ignition coils are strongly affected by the contact breaker, particularly at high speeds, meaning that the contact breaker should be of the right quality if the coil has to deliver top performance. On a six cylinder engine running at e.g. 4000 revolutions per minute the contact breaker has to make and break some 12000 times per minute. At each make and break a starting current (commencing at 4 Amps or so and falling away to about 1.5 Amp as speed increases) has to pass across the points without appreciable voltage drop, if the coil is to build up a maximum spark voltage during the very brief time the contacts are closed.

Standard Lucas coils normally deliver an ignition voltage of 20 to 30 kV. A “High Performance” coil and more in particular a “Sports Coil” provides an increased voltage of about 40kV or higher, because of the different relation between the number of windings of the primary and secondary windings.

Regarding the manufacturing method of the coil housing or “can” we see a clear split-up in the earlier “assembled” housings made of (zinc plated) steel with soldered seams and bottom versus the later aluminium cans made via a process called “cold impact extrusion”, a method also used for the manufacturing of large capacitors. Lucas introduced this process around 1950 also for the SA type of Sports Coil. Notice the “expansion” groove at the lower part of the aluminium cans, which is made to prevent the can to burst in case of an excessive overheating of the coil. Later aluminium cans no longer have the expansion groove, because other thermal protections have been built-in.

This first generation Sports Coils coded HS was developed by Lucas in the 1940s in a 6 Volt and 12 Volt version. It started most likely as a black coated version. It may have been not available for a number of years until 1950 when it became available in a grey painted housing. We refer for this to the Lucas advertisement of April 1950 introducing the new grey coloured Sports Coil in which Lucas states: “Motorists will welcome back the Lucas Sports Coil”. A survey:

1.1 The black HS6 and HS12 coil had a brass Lucas type plate, which was fixed to the clamp with 2 screws. All HS coils are marked SW (ignition SWitch) and CB (Contact Breaker points) for the 12 Volt circuit connection.

Part numbers are unclear, but might well be identical to the successor HS coil. See 1.2. 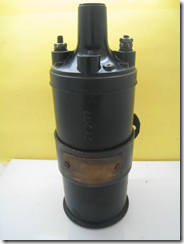 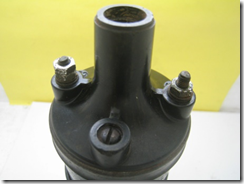 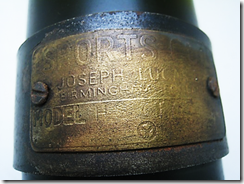 1.2 Early 1950 saw the introduction of the grey (brown)painted HS coil, initially with a black metal plate fixed with 2 slotted CSK screws. The housing was painted in grey-brown; this might well be Lucas “poly-chromatic” grey, a colour they used for many products like the HF1748 horns.

This coil was available in both 6V and 12V. 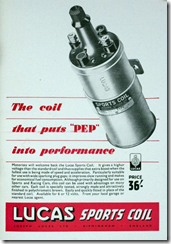 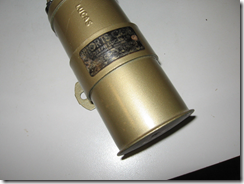 1.3 Later (but still in the early 50s) this coil had the label glued to the coil clamp. The label was mainly aluminium coloured with a black band at the bottom. Code numbers remained unchanged. 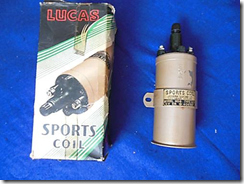 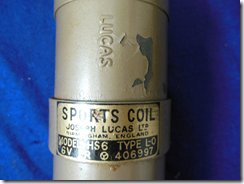 In the early 1950s a second generation with a larger diameter aluminium can and different Bakelite top was introduced which was commercially named SA. This coil was still manufactured until the end of the 1970s.

Lucas SA Sports Coils can be easily recognised by their particular colour of the top part (red-brawn: these coils are also called “Red-tops”) and the special moulded Nut 422792 for the screwed connection of the HT cable to the central contact of the distributor cap; this nut differs from the one used on all other Lucas coils with a similar connection type. The diameter of Sports Coils is with 61 mm about 3 mm larger than a standard (LA or HA) coil. The clamp (or “saddle” as Lucas calls it) is also special and has part number 423947. 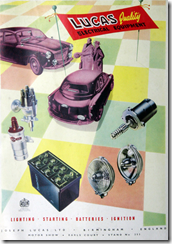 Two versions have been made:

Three different 12V connections have been applied by Lucas: 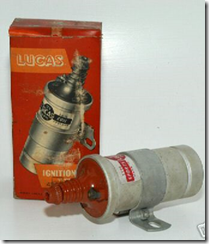 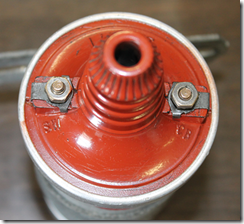 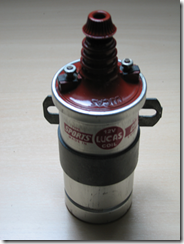 2.1.2 Later 12V Coil versions starting from suffix F (about 1960) were supplied with one “LUCAR” single connector (54190096) and one double connector (54190108) that could be installed on the two (2BA) studs using the existing nuts (still leaving the possibility to use this coil on older cars with eyelets). This was done because many manufacturers had meanwhile switched over to the LUCAR kind of connector for their car production.

2.1.3 Final 12V versions with suffix K to M (commencing 1968 running till 1978) had double LUCAR connectors riveted on the top, which no longer allowed the use of eyelet connectors. At the same time the marks SW and CB were replaced by + and – also because most cars had meanwhile switched from positive ground to negative ground. 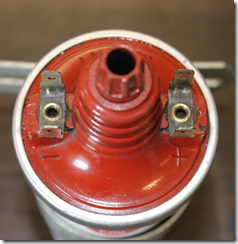 Below some examples of the 6V version, in this case a later version with double (riveted) Lucar connectors. 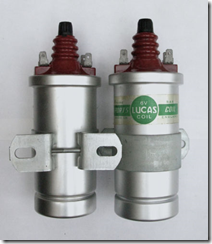 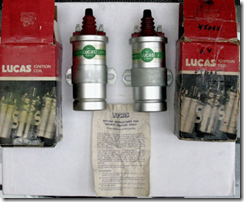 An additional version has to be mentioned here which was not called a Sports Coil, but offered identical advantages. The High Energy Coil was offered as a period accessory in the 1960s. This coil has a die casted Aluminium housing (heat sink) and a unique bracket with the Lucas logo in blue. Note the top that is identical to the SA Sports Coil with a screw-in type high tension connector and screw posts for the primary terminals.

Introduced in late 50’s or early 60’s, this type of sports coil used the standard housing of the HA type High Performance Coils and not the (larger) housing of the SA type of sports coils. In addition it no longer carried the HT lead connection by means of a “moulded nut and split washer” but changed over to a “screw-in” connection for the HT cable to the distributor cap. The PA series were part of the Lucas range, not replacing but in addition to the SA series over the period 1960 – 1980.

Lucas issued a leaflet “Instructions for fitting sports ignition coils models PA6 (6 volt) and PA12 (12 volt) export only, SA6 (6 volt) and SA12 (12 volt) home market” which might indicate the relation between the two product ranges. The reason for this might be that the non-UK (read “non-Lucas”) car industry used HT cables connected by means of a system whereby the (core of the) cable was screwed into a thin threaded stud. Due to the dominant position of Lucas in the UK it could continue the SA series with the “moulded nut and split washer” connection. 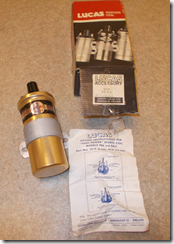 A fourth generation Sports coil (also known as the Gold Sports coil) was introduced around 1978 with the type code SP. The commercial code was:

There are (at least) three different versions of this coil.

Early coils had a white top with double LUCAR connections riveted to the top. The SP12 coil had Lucas part number 45288A (at least initially) and had a silver label with “12V Super Energy Sports Coil” printed. Note that these early SP12 versions had an “expansion” rim at the lower end of the housing, in line with the housing of the SA series. 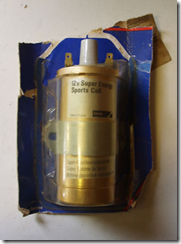 A later version of the 1980s (now also named DLB105-B) with part number 45341A had a white top, but now with a black label positioned on the clamp and no longer on the housing above the clamp. The abbreviation B.Y.S. (manufacturer code?) was added in the numbers stamped on the bottom of the coil. These coils went back to the screwed Lucas low volt terminals which allowed to use this coil also for the classic eyelet connections. These coils have most likely been manufactured from late 1980s till about 1996 when Lucas was sold to a US company. 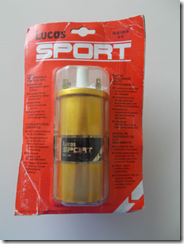 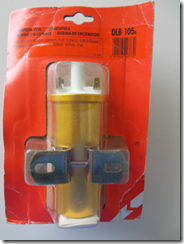 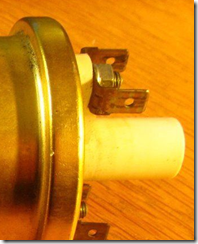 Following the return of “Lucas Electrical” in the UK market the DLB105 / SP12 “Gold” sports coil was continued, however with  a green Lucas label on the coil clamp. 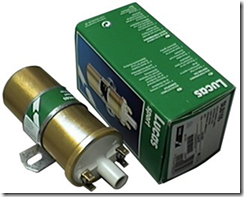 Probably the most recent version is made with a black top and with removable “Lucar” connectors, opening the possibility to have eyelet connections as well. Also note that the clamp has now “open” mounting holes. 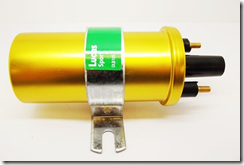