From about 1954 Jaguar introduced 5¾” Lucas SFT576 fog lamps on most of their models, either standard or as a factory option. Before ‘54 they used the larger 7” Lucas SFT700 as an option only. The Jaguar XK120 had the Lucas type SFT 700S (Lucas assembly no. 053135/A; Jaguar code: C2988) as an optional extra including mounting brackets and a switch. This version is not further discussed in this article.

There are two different versions of the SFT5776: first generation manufactured from 1953/54 till probably mid 1963 and a second generation from  mid 1963 onwards.

The Lucas SFT576 showed some modifications over the years.  Early SFT576’s have a smooth flat upper top clamp where asthe later versions have a ribbed surface. 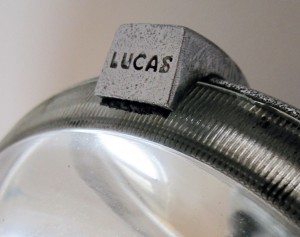 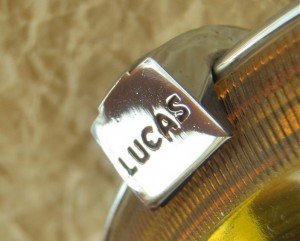 A second difference relates to the (Single Contact) bulb holder. The early version have a round black “Bakelite” bulb holder (Lucas 554667) and later versions have a more simple oval shaped bulb holder made from phenolic (Lucas 54520352). The exact change-over date is still under investigation. 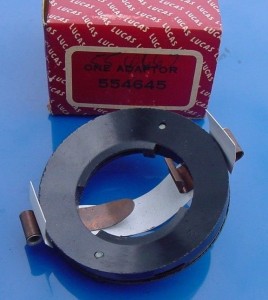 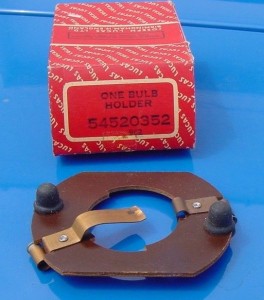 All these fog lamps use a 12 V single contact 48W bulb (Lucas 323) with transverse filament placed in a clear reflector unit (Lucas 554813). Note that there are also “double contact” SFT576 versions, as used by Rolls Royce that require a specific bulb (Lucas 409). The corresponding bulbholder (Lucas 554822) is different and should not be used on any Jaguar.

Lucas started production of the SFT576 around 1953 with the 55128B versions (55133B for France with yellow reflector unit Lucas 554820). In the years thereafter the 55128 version received suffix D and towards the end of the decade suffix E.

To make life even more complicated, we have to mention here that early 55174 versions  had the smooth whereas later versions had the modified upper clamp with “ribbed” top surface (see photo above).

The installation of SFT576 lamps on the XK140 and 150 is rather unique, as jaguar used a “Distance Collar” to obtain a higher position for the fog lamps, still using the Front valance behind the front bumper as a base. 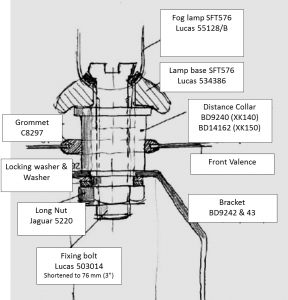 Initially Lucas had two types of Fixing bolts. The standard version (Lucas 503890) was a 55 mm (2.2”) bolt used in combination with the standard nut 180377; unfortunately early Fifties Lucas catalogues did not mention the standard fixation bolt so this number (once source only) still has to be confirmed.  A second (longer) version was made for the use of the SFT576 on Bentley and Rolls Royce cars: this fixing bolt (Lucas part number 503014) is 105 mm (4⅛ “) long. The 1960 Lucas catalogue uses this longer version for all SFT576 versions, apparently under the motto: “long enough for all applications” (or cut to size). The thread used by Lucas (and Jaguar) is BSC ⅝- 26 tpi whihc is British Standard Bicyle thread. 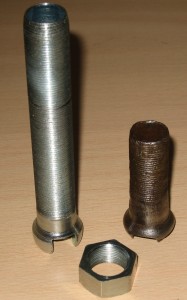 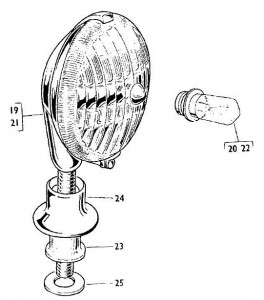 The solution Jaguar introduced comprised a special extra long nut Jaguar BD9241 for the XK140 and/or BD14163 for the XK 150. Please note that some suppliers use part number Jaguar 5220 for this nut, but this is actually wrong as this refers to the Lucas “short” nut 180377. The extra long nut partly fits within the Distance Collar and is long enough to reach the thread of the shorter standard fixing bolt. The difference between the two versions (BD9241 and BD14163) is unclear but they might have a different length as the replacement version that is supplied at the moment is shorter than the earlier ones. 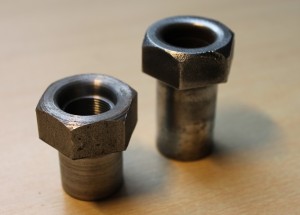 Next to the Nut and Collar a shakeproof washer (Jaguar C.733) is used and a special Packing Plate Jaguar BD104160: the XK 140 SPC specifies one per lamp, but later versions have the description “as required“. The photo above shows a 1961 item with two Packing Plates. 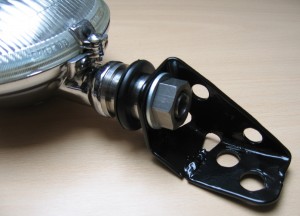 The original units had Lucas number 554813 (clear front glass) and for France 554820 with an Amber front glass. These versions had the (factory) code M5 and the text “MADE IN ENGLAND” at the bottom of the front glass. Modern replacement units don’t have these markings, but are otherwise identical. 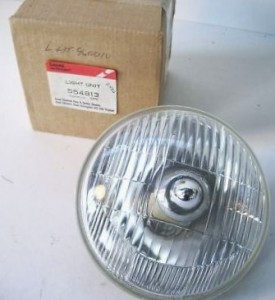 Fog lamps as an Optional Extra for XK 140

Fog lamps could be ordered as an optional extra for “non-SE” cars.

The official parts list indicates that in that case the existing 3-position Road Lights switch (Lucas PRS7 type 31426/A) has to be replaced by the 4-position switch (Lucas 31524/A). A Red/Yellow wire is then installed from the new switch (position 11) to the Fog lamps.

The change-over from an independent switch to replacing the 3-position into a 4-position Road Lights switch has to do with the question whether in a particular country (state) it is by law required to switch off the Head Lamps when the Fog Lamps are turned on.

The exact position of this independent Fog Lamps switch is unclear. We do know that cars with 2” SU carburettors have an additional Choke cable + knob installed in the wooden Instrument Panel to the right side of the drawer. This might well be the place to mount the Fog Lamps switch. However, this switch doesn’t seem to have a long thread required for mounting in a (thick) wooden dashboard (as did the earlier XK 120 switch) , but it may be possible to solve this by creating a recess at the back of the panel allowing to position the switch more to the front.

Later a complete Lucas kit became available under part number 053272 (which also succeeded the former independent item Lucas 55128/x) containing a switch Lucas 31201/D, knob Lucas 314403 and even a mounting bracket 056117. This should apparently be mounted beneath the (wooden) dashboard.

The Jaguar XK 120 used a similar set-up . Early  XK 120’s having factory installed Fog Lamps may have been executed with a chromed knurled knob screwed to the switch. Later versions may have Fog Lamps installed as an “Optional Extra” with a separate switch having Lucas part number 031216 (Jaguar C2744). The Lucas Master Parts Catalogue indicates that assembly 031216 consisted of a PS7-1 type switch 31228A (an Interior Light switch with long thread for a wooden panel, similar to switch 31201 except for length of thread) and a black Bakelit knob 314437 without “F”. This switch was positioned at the end (driver side) of the Instrument panel (according Urs Schmid).