The routing of the Flexible Breather Pipe (Jaguar C.2485) is not completely clear but the information in the XK 120 SPC gives sufficient guidance. The top of the pipe is connected to the Front Cover / Breather Housing C.2485 by means of a Cheney 1A Clip with part number C.2905/3. For the first 1000 engines, a special Clip (C.2442) was used to hold the bottom end of the flexible breather pipe to the chassis. Most likely, the fixation method of this Clip was identical to the one of the later clip (see next chapter). It is unclear what the difference is between the early and the later clip version. According the SPC the Clip is fixed to the chassis using an ( 5/16″ ANF/UNF x ½ “) setscrew with nut and shakeproof washer. This seems not identical to the method described for the later Clip. Conclusion is that the breather pipe runs between generator and inner wing valence downwards and that the bottom of the flexible breather pipe is held by Clip C.2442 fixed at the LH chassis, possibly between Radiator Rod and its Bracket.

The length of the early Flexible Breather Pipe C.2485 is not mentioned, but we may assume (after comparison of the routing of the XK 140 and 150; see hereafter) a length of around 30”. 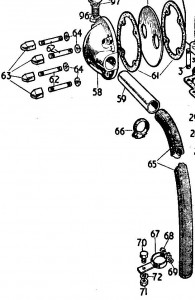 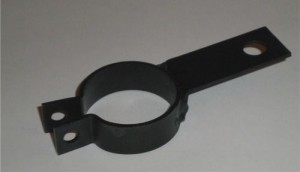 The early XK 120 Clip C.2442 has been replaced by a new version with Jaguar part number C.4728.  The differences between the two remain unclear.

The bottom of the pipe is fixed by Clip C.4728 which is positioned between the bottom end of the Radiator Rod  and its Bracket welded on the LH chassis rail. To be confirmed by other examples. 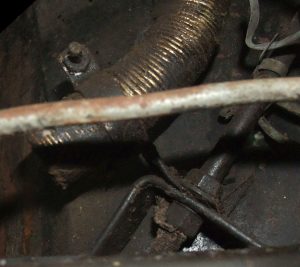 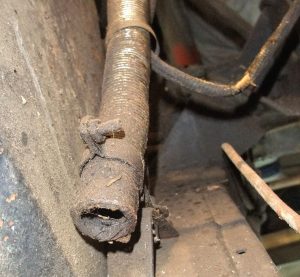 The flexible breather pipe itself also changed, as it received a new part number C.2485/1, possibly due a change in length. As the XK 140 uses the same pipe, we know that the length is about 31”. 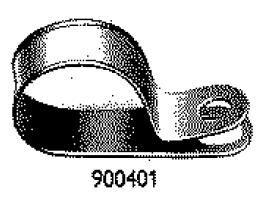 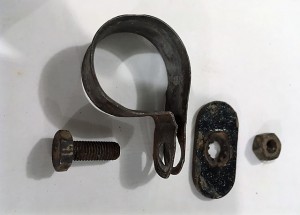 The routing and length of the flexible breather pipe is different from the one for the XK120. The first part of the routing is still the same (from the Breather Housing over the Generator downwards), but towards the end of the pipe it runs over the LH chassis rail further to the back. Clip C.1040/21 (Lucas 900401) is positioned under the setscrew that holds the inner wing valence to the L-bracket welded on the LH chassis rails. We have 3 photos to show this routing. 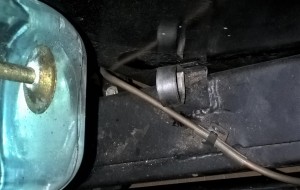 Clip C.1040/21 with the fixation setscrew at the underside. (Photo Bob Knynenburg)

Note that Clip C.1040/21 is mounted with the loop upwards, as there is insufficient space between bolt hole and chassis rail. This implies that the flex pipe runs about 1” above the chassis rail at the L-bracket. 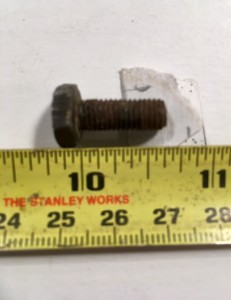 The Flexible Breather Pipe ends just in front of the radiator stay rod bracket on the chassis, as used on early XK 140’s (until about May 1955). We can see the end of the flexible pipe on this DHC (and OTS as well) as the washer bottle is further to the rear. For the FHC, the end of the pipe is partly hidden under the washer bottle. 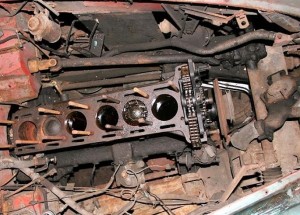 Above is an older photo showing the same arrangement on an unrestored LHD FHC. When looking in detail, Clip C.1040/21 can be seen on the L-bracket holding the inner wing valence. As said earlier, on FHC versions the flex pipe runs under Washer Bottle. The pipe length is about 31” for all XK 140 models.

On all versions, the Flex Pipe ends about 4” after Clip C.1040/21. On the LHD FHC (and probably on the DHC and OTS) versions there is the possibility to bend the bottom end of the flex pipe downwards, so oil fumes and droplets may drip on the road; in case of the LHD FHC this is near the Master Brake Cylinder. 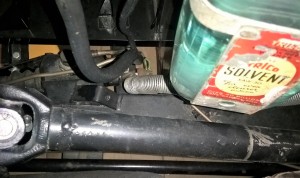 The XK 150 SPC defines for the flexible breather pipe (new part number C.15400) a length of 33” which is 2” longer than the one for the XK 140. The only other change in comparison with the XK 140 is the addition of one extra Lucas clip C.1040/21, located at the inner wing valence. The XK 150 SPC defines only one fixation bolt for the second (upper) clip, but the SPC for the later XK 150S lists in fact two fixation bolts: one for the upper and one for the lower Clip which seems the most logical version. The bottom clip is positioned and fixed as per XK 140. The exact fixation point of the upper clip is unclear, possibly on the LH support bracket for the inner wing valence. 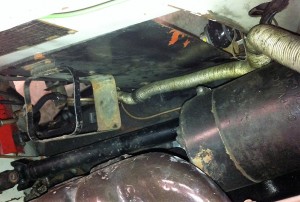 XK 150 routing is identical but with 2nd clip

This photo shows the pipe routing with a second clip where the pipe meets the inner wing. The bottom clip is clearly visible just below the Washer Bottle Bracket.