One of the ways to keep the coolant temperature under control is to increase the amount of air through the radiator. Next to installing an electric cooling fan, bonnet louvres may help (of course under the condition that the car is moving). The latter solution also doesn’t consume any power from the engine. This is the reason why in particular race cars (including Jaguars) had louvres installed in bonnet and/or wings.

Jaguar used this principle for their XK’s and installed louvres in various versions that took part in active racing. In particular during the early years, C-types and some XK 120’s received this option, but there are also at least two examples of the same operation for the XK 140.

It is rather difficult to obtain exact data on the position, number and size of the louvres in the bonnet of the XK120 and the C-types. Furthermore, we note that the dimension’s differed per type and per year because they were made by hand and the development of the cars continued of course. What becomes clear, however, is that there are always two rows of louvres symmetrically located at both sides of the middle of the bonnet.

(All dimensions given here serve to help getting a better insight, but claim in no way to be exact).

Most prominent example is Clarck Gable’s second XK 120: a 1952 steel-bodied OTS with chassis number 672282. After his complaints regarding the lack of ventilation in the engine compartment Jaguar punched two rows of slots in the bonnet (see below).

Jaguar XK 120 OTS Works Competition car with registration MDU 524, had a different bonnet louvre pattern. This originally May or June 1952 built RHD OTS with chassis number 660986 is well-known after it had been extensively modified in 1953 to become the streamlined car that set a speed record of 173.159mph on the Jabbeke motorway in Belgium. Before and after that event it participated in a more standard execution in many races in the UK driven by Albert Powell and Brian Redman. 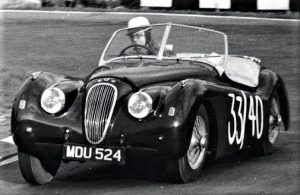 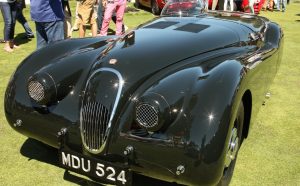 Whereas Clarke Gable’s  car had triangular shaped louvres almost over the entire bonnet length, the MDU 524 louvres have an almost square lay-out, much more in line with the later XK 140 patterns (as we will see below).

Most prominent example of an XK 140 FHC with bonnet louvres is the 1956 Le Mans car driven by Peter Bolton and Bob Walshaw: registration number PWT 846 and chassis number S 804231 DN. This was a SE version in standard form with apart from the optional 2” H8 carburettors and an additional fuel tank, also got extra air intakes at the front and louvres in the bonnet. 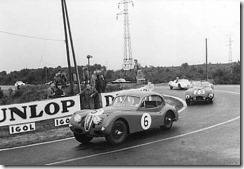 Clausager in his book “XK 140/150 in detail” shows a detailed photo of the louvres which reveals that they have not been made straight in the aluminium bonnet material itself but made in a separate plate and mounted from behind in an opening cut in the bonnet. The louvres are pushed through from the inside and the air opening is in the direction of the windscreen. We count (two times) 16 louvres with an estimated width of 185 to 190 mm (7¼ to 7½”) over a length of about 445 mm (roughly 17½”). This implies that the individual louvres are about 28 mm (1.1”) wide with an opening of about 12 mm (½”). The louvres are placed very close to each other without any space between them (which somewhat reduces the mechanical strength of this section and louvres can be easily bend).

Regarding the exact location of the louvres on the bonnet, the position on the Le Mans car is towards the end of the bonnet close to the windscreen. This was only possible by removing the aluminium reinforcement construction on the inside of the bonnet and welding it back after the louvres have been placed (what may restrict the air flow).

The second example of an XK 140 with bonnet louvres is an early “experimental” OTS (most likely chassis number S 8000033 DN). This car had two additional air intakes at both sides of the grill above the bumper and bonnet louvres, very much in line with the Le Mans car (which was a much later car). It is impossible to reproduce the exact measurements of these louvres, but they seem to be close to the ones of the Le Mans version.

Making bonnet louvres in an XK 140

When making louvres in an XK 140 bonnet, there are two alternative ways to go:

1. Making two separate plates with louvres and fix those in an opening cut in the bonnet.

2. Making the louvres straight in the bonnet.

When opting for the second method, limitations are created by the reinforcement construction at the inside of the bonnet: the louvres cannot be placed as close to the windscreen as was the case for the Le Mans and Experimental car. And the total available length for the louvres between two reinforcement brackets, allows only for about 10 openings (spaced at a distance, because a certain strength of the bonnet will be appreciated!). The louvres are cut and formed with a special tool and machine (see photos) and the result is very satisfying. 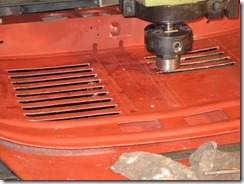 Making the louvres with a special tooling 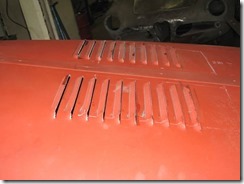