In 1976 the new European Regulation76/761/EEC on “motor-vehicle headlamps which function as main-beam and/or dipped-beam headlamps and to incandescent electric filament lamps for such headlamps” became mandatory for all EEC member states. This replaced the various national regulations in action so far. A survey of known earlier national regulations in Europe is found hereafter.

European countries (except GB) required a headlamp that fulfilled certain legal requirements regarding a “sharp cut-off”  dipped beam in combination with a high light output.

The French Ministerial Decree of 8th October 1929 formulated a new regulation for car lighting, becoming effective per 1st May 1930. According this decree all cars shall have lighting equipment that should be able to:

All headlights developed to fulfil the above requirements will be investigated by a committee of the Ministry of Public Works (Travaux Public) to receive a conformity mark mentioning e.g. Agréé AB (Certified AB). All headlights mentioning Agréé AB are followed by the letters TP (Travaux Public) and the number of the certification of the homologation (№ 123) issued by the committee. 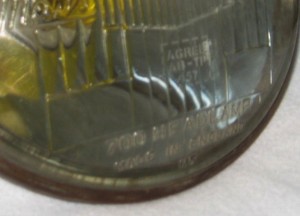 Netherlands  “The myth of the NL mark”

Per January 1st, 1954 a new law had been introduced in the Netherlands that all lighting (and bulbs) of all vehicles on the road should have a “state approval mark” in order to increase road safety. The requirements had been laid down in this law and testing requirements had been assigned to (and consequently drafted by) the Dutch electrical testing Institute KEMA. The “state approval mark” should be clearly visible on the relevant part. From that moment onwards all approved vehicle lighting (from bicycle rear-lamps to car headlamps) carried the NL mark.

All stories (often referred to in GB or USA) about NL meaning “not legal” or “near left” are incorrect: it merely was a type approval for the Dutch market required to sell cars in Holland.

KEMA was (and is) a leading European (ISO certified) laboratory in the area of electrical safety and the KEMA approval mark is still found today on many electrical products. 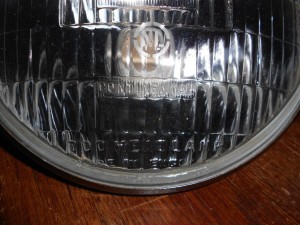 According the „Straßenverkehrs-Zulassungs-Ordnung“ StVZO (Road Traffic Approval Regulation) lighting components on vehicles (generators, headlights, rear lights, reflectors) have to be made according an officially approved construction. The first Regulation dates from 13th November 1937. To show conformity, the German Transport Ministry (KBA) in Flensburg provides an approval mark on manufacturers request. It consists of a wave line with the letter K followed by the testing number.

The approval mark is placed on every approved light-technical element of the vehicle. The approval mark is obtained if components meet the applicable Technical Requirements (German: Technischen Anforderungen TA). This TA consisted of Annexes to § XXIIa of the German StVZO. Vehicle lighting without an approval mark shall not become commercially available nor sold; doing so is considered a felony.

Testing is not performed by the German KBA, but by the Licht Technical Institute of the Karlsruhe University, which is also shown in the letter „K” in the approval mark. The German KBA in turn checks the conformity to requirements, initiating regular tests of randomly obtained products from the production line. 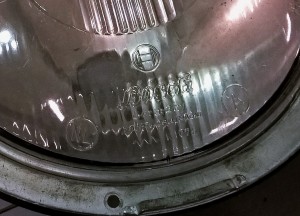 Bosch headlamp with K, NL and A approval mark

Today certain elements of this regulation is still applicable to Bicycles, whereas EEC/EU regulations have taken over other transport segments.