Two copper fuel pipes are connected to the fuel pump during the assembly process of the XK 140. It concerns C7556 (Fuel pipe (centre) from rear pipe to inlet connection on fuel pump) providing fuel from the tank, and C7557 (Fuel pipe (front) from outlet connection on fuel pump to flexible hose) pumping fuel to the carbs. Apart from the fact that both pipes have a (very) sharp bend where the connection with the fuel pump is made (asking for maximum care when installing these pipes), these pipes sometimes touch the Fuel Pump Shield C8010 with the risk of damaging the fuel pipes over life.

In case the fuel pump has to be removed for inspection or repair, these copper pipes are very difficult to remove as they are partly behind the main chassis rails and there is very little space to manoeuvre these pipes away from the pump. 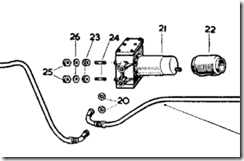 The pipe connection system was improved many years later by Jaguar on the new 150 “S” versions, introducing a new flexible hose connection C14721 (Flexible petrol pipe from outlet side of rear petrol pump to branch on front pipe) with a banjo at one end and a compression (“olive”) connection for ⅜”copper pipe at the other end. This hose is connected to the pump using a Banjo Bolt C11488 instead of the male brass unions on the copper pipe (SU part Nº AUA 4650) as used for the XK 140. 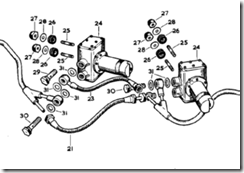 We can greatly improve the pipe-to-pump connections on the XK 140 and (non-“S”) XK 150 by using two of these flexible hoses (C14721) and Banjo bolts (C11488) and connecting them to the (shortened and now straight) copper pipes C7556 and C7557 using a ⅜” pipe male union that fits the female union at the end of the flexible hoses. 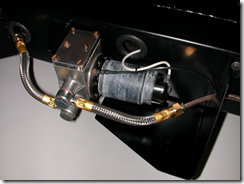 The result is a very “flexible” solution offering easy assembly during the restoration of your car as well as disassembly for maintenance purposes. And last but not least: it looks very professional! 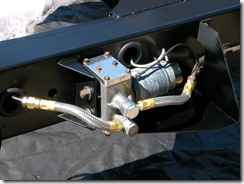