This article attempts  to summarise (in a structured way) information published on the subject of Derrington steering wheels, gathered from various sources.

V.W. Derrington Ltd. has been established around 1919 in New Malden, Surrey, England (about 12 miles south-east of London) initially tuning motor cycles of that era. By 1926 they moved to nearby Kingston and became successful in developing and supplying tuning components like manifolds, exhaust pipes, cylinder heads, and other mechanical improvements for automobiles as well as luggage carriers. From 1933 onwards Derrington advertised with steering wheels as part of their business activities.

Victor William Derrington had been a (motorcycle and automobile) race driver himself for many years, allowing him to exploit his racing experience for developing tuning equipment.

After WW2 there were two “fast runners” made at the Derrington works at London Road in Kingston: Derrington luggage racks and Derrington wooden steering wheels available for many models of the 1950’s and 1960’s. According to “Motor Sport” magazine of December 1959, Derrington employed at that moment eight people full time in the production of steering wheels. 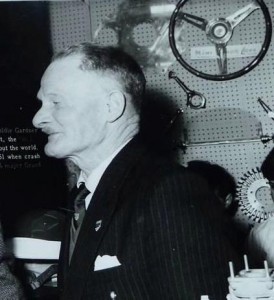 Note that over 60% of Derringtons production was exported, the majority to America. The steering wheels were especially popular in the States and several hundreds have been exported every year from about 1953 onwards. Orders for the USA could only be supplied through their West and East Coast agents: Vilem B. Haan in Los Angeles (CA) and Wilco of Rochester (NY).

As production volume increased, Derrington started to outsource some of the steering wheel activities. By the end of the 1950’s another steering wheel manufacturing company Moto-Lita was capable of providing “Derrington” steering wheels, however it is believed that Moto-Lita made wheels in those days were not of the same high quality as Derrington manufactured wheels.

A similar wheel was offered by the Donald Healey company for their (Austin-Healey) sports cars, which may lead to confusion. This wheel is therefore further described in Chapter 5.

Finally, the name Derrington is often linked to a Jaguar woodrim steering wheel that was available as an option for the Mk 2. However, this was not the “Derrington wheel” but a different model as is described in Chapter 6.

This brings us to the following timeline for the Derrington (style) wheel:

Around 1953/1954 Derrington started the manufacture and delivery of the “Derrington wheel”. The design itself shows some resemblance to an earlier Italian manufactured Nardi model with three slotted spokes, however not with the characteristically 3 x 120° even spacing of the Derrington wheel.

Derrington had a patent applied for the making of wooden steering wheels on October 18, 1954 and granted on October 5, 1955. 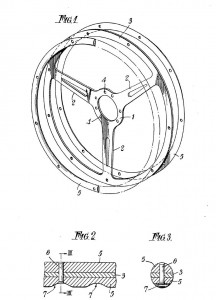 Specification and characteristics of the original “Derrington wheel”:

The “Derrington wheel” was standard delivered in 16″ diameter, but 15″ and 17″ versions were available to special order. There are also examples of original Derrington manufactured wheels that had a 9 hole centre mounting. 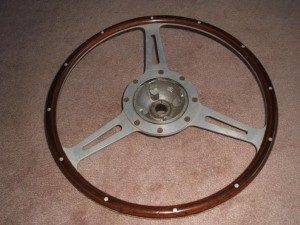 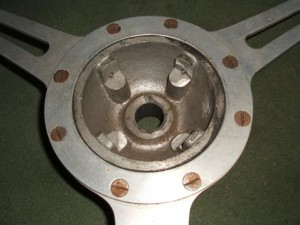 The frames of the wheels were cut from Birmabright (an alloy of aluminium and magnesium with 7% magnesium and 1% manganese; also known as BS NS4, American 5251 and ISO AlMg2), and the laminated wooden rims were riveted to the frame. The laminated woodrim consisted of African Obechi wood and Mahogany. The boss (or hub) is cast from aluminium (mostly LM6) and machined to fit each particular model.

There have been many discussions over the past decades, whether this Derrington wheel was a genuine Jaguar factory option or not. Although apparently more was possible at Jaguars (including a “Bluemels wood rim steering wheel”) than one would understand from the “optional extras” 1958 list, the general opinion is that wooden steering wheels were not available as a factory option, until around 1960 when Jaguar offered a wooden steering wheel for the Mk2 (part number C.25198), but we know that this is actually not the even spaced “Derrington wheel”. Part number C.25198 is mentioned in spare parts bulletins and parts catalogues as well.

We also know that the “Derrington wheel” was rather popular in the 1950’s and was advertised in many car magazines, including those in the USA. Reference is made of the June 1960 issue of Sports Car Illustrated containing ads for the “Well Known Derrington Racing Steering Wheel”. We referred already to the two US Derrington importers, which indicates that Derrington wheels were freely available in the USA. So therefore we may assume that a (large?) number of XK’s may have received an aftermarket Derrington wheel in the 1950’s. Whether or not there was any “active support” from Jaguar USA in supplying these steering wheels remains unclear. Dealers however may have recommended these Derrington wheels themselves in order to increase sales. 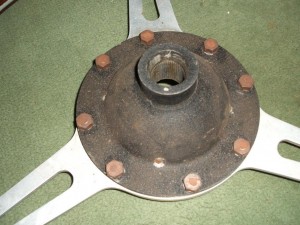 The Derrington brochure (shown below, probably dated 1960) not only lists the prices in Pound Sterling but also in US Dollar, which further supports the active marketing policy of Derrington in the USA. Also note the text in the brochure that “practically the entire output for the past few years having been exported”. This may further clarify the presence of Derrington wheels on US Jaguar XK 120, 140 and 150 in the 1950’s.

The list with (only European) car brands and types in the Derrington brochure is long and all Jaguar versions from the period 1950 to 1960 have been listed. 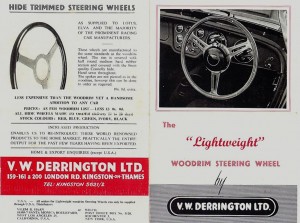 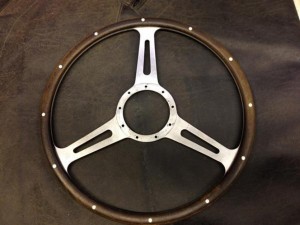 Above is a photo of a 1960’s Derrington wheel made by Moto-Lita. Diameter is 16 inches. It uses the Moto-Lita style hub with 9 screws. Moto-Lita still manufactures the “Derrington wheel” today and adheres to the original design although with 9 bolt centre mounting (see photo below). 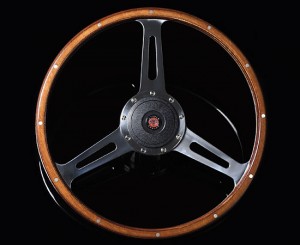 The story goes that Donald Healey aimed at in-house production of 16” woodrim steering wheels for the Austin Healey 100 series. The designs were made by Gerry Coker and the first models were manufactured in-house. There were in fact two designs: one with drilled and one with slotted spokes. The latter has a very close resemblance to the “Derrington wheel” with even spaced spokes.

These first versions (also used on the AH 100 Le Mans cars) were made of six separate solid wood segments (not laminated) fixed to the aluminium frame by 4 rivets for each of the 6 per segments (so 24 rivets in total). They had a 9 bolt centre mounting (like Moto-Lita). 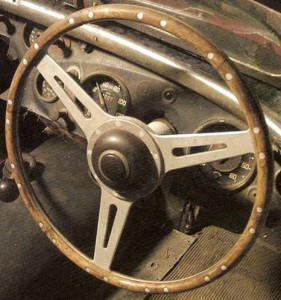 The AH 100M could be delivered with the slotted spoke version as a factory option. These wheels were no longer made by Donald Healey but manufactured by the Coventry Timber Bending Co. Ltd . The Coventry Timber Bending Company  was a manufacturer of “laminated and solid wood work for cars and boats”. The company had been established in 1938 by their directors: H. E. Newsum and L. G. Hains. They started activities at Swallow Road, Holbrook Lane in Coventry, but later moved to new premises about 5 miles to the east,  at Bodmin Road, Walsgrave, also in Coventry. In 1954 they also produced the  D-Type Jaguar steering wheel and from 1961 produced the E-Type steering wheel as well. In 1984 the company became Insolvent and was wound up.

The Coventry Timber Bending Co. manufactured “Derrington style” woodrims were made of beech and had only six rivets to fix the wood. The aluminium frame was initially riveted (not bolted) to the boss. 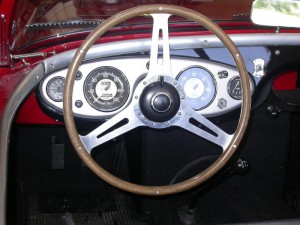 Strong resemblance, but not Derrington!

The steering wheel with drilled spokes became the standard wheel on the 100S production cars.

Around 1960 Moto-Lita began to supply “Derrington” style steering wheels to Healey, which now had 18 rivets instead of 24 for the in-house manufactured versions or instead of 6 as made by Coventry Timber Bending. These Moto-Lita steering wheels were Healey badged (or stickered). 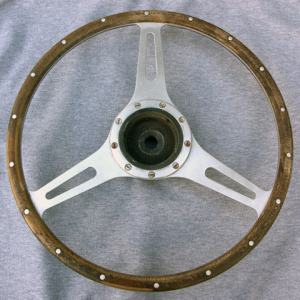 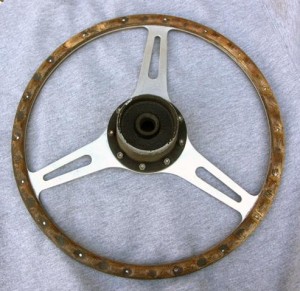 Most likely the above photos show the later Moto-Lita made “Derrington wheels” supplied to Donald Healey with 9 screw mounting and 18 rivets! The 6 segment solid wood method has been replaced by a laminated circular construction.

The Birmabright spokes had been polished and the woodrim of contrasting laminations of white obeechi and rich red mahogany were clear lacquered to bring out the grain. The Jaguar wheel was priced at £12 and it takes the standard Jaguar Mk 2 half horn-ring. 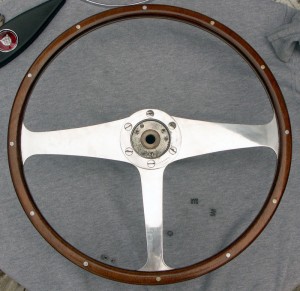 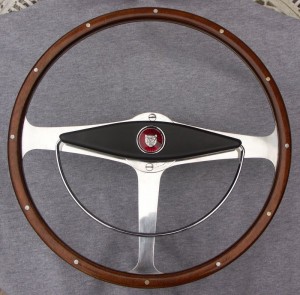