Jaguar used Wilmot-Breeden locks and barrels on all their XK types. Wilmot-Breeden keys are branded “Union”. The following gives an overview of the history of Wilmot-Breeden and the details of the applied barrel versions for the Jaguar XK (140).

Starting in 1932, Ford UK began to use “MRN” series keys, which has codes ranging from 01 to 50.  Other car brands also applied Wilmot Breeden locking systems. Jaguar in the post-war era, was one of them. These codes were used through 1949, but as automotive production increased, they needed more codes to go around. Jaguar applied the FNR series as well, in addition to the MRN.

Key codes can be found either on the face of the ignition switch, stem of the door handle, or on the lock barrel itself. However, barrels, door handles or even ignition switches, could have been changed to another key code at any time.

Original keys were made by Union / Wilmot Breeden.

There are many different locking barrels used: separate versions exist for door, ignition, boot lid, petrol lid and glove box. Each of these barrels is different in length and overall design, but they do (or may) share the same keys. 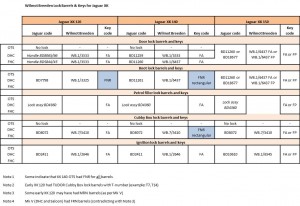 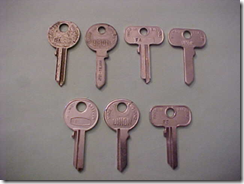 Every lock consists of 5 brass tongues composed of three different dimensions, corresponding to the cuts made in the key. A deep cut in the key corresponds with a higher remaining part in the tongue (see photo below). The overall distance over the 5 tongues is 3/8 “ meaning each tongue is spaced at 5/32” from the other. 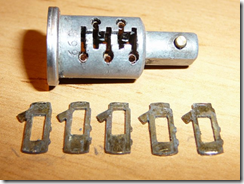 Jaguar glove box lock with key code number stamped on the base of the lock. 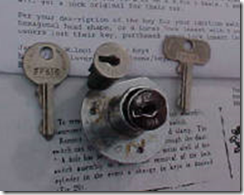 Key of “cubby” box always has a rectangular head

One thought on “Wilmot Breeden locks and (Union) keys.”